You will all be overjoyed to hear that we are resuming our guided rides programme from the 22nd May 2021.  Groups of up to 15, including the ride leaders, will be allowed but we will need track and trace information from all attending.

Cafe stops should be possible by then, which will be a relief to many and allow us to support the businesses and charities that have had such a hard time over the past year.

The first outing will be a steady ride from Queen’s Mill Castleford, starting at 10 am on the 22nd May.  From then on, there will be regular rides from Queen’s Mill, Nostell, Anglers Country Park and the Darrington Hotel.  Details of all rides appear on our website on the ‘Rides’ page, with reminders on our Facebook page nearer the time.

You wait months for a guided ride and then two appear at once – or is that just buses? Bike Week this year runs from the 30th May to the 5th June. The mission of Bike Week is to show people there is a bicycle for everyone and to enable all to discover a passion for cycling.

Cycling UK believes that cycling is an incredible solution to many challenges which the UK faces.  More cycling could help fix: air pollution, obesity, poor mental health and traffic congestion.  Cycling UK  aims to help address these challenges by supporting a growing social movement, passionate about making it easier for more people to cycle.  They suggest that if you cycle regularly in adulthood, you will enjoy a level of fitness equivalent to someone 10 years younger. They recommend get active, feel the benefits and stay young.

On the 30th May 2021 they are aiming to create the world’s biggest bike ride.  Much like the Great Garden Birdwatch, individuals will participate from the comfort of their own area. WDCF is joining in the Big Bike Ride by providing multiple guided rides on the day from a number of starting points.  Our rides will begin at Queen’s Mill Castleford, Pontefract Park, Anglers, Pugneys, Thornes Park and Nostell  where we will be lending bikes and helmets out to those who need them.  Rides will start at 10.30 am and be repeated at 1 pm, with extra rides in between if staffing permits.  If you can help, please email our ride leader on: info@cycling-wakefield.org.uk.

Our workdays resumed on the 6 April, albeit on a small scale, with 5 willing workers turning up to the first session. Two of our most regular and hard-working workday volunteers, Andy and Geoff, are seen here repairing and replacing the supports that stop the Trans Pennine Trail falling into the disused Barnsley canal. Andy and Geoff have been at this task for some time and there is still much to do.

This is not the only track in the district in need of our workday group’s attention, so if you have any suggestions of tracks you think need a little TLC then let us know. And, of course, if you want to join in with the labouring just email info@cycling-wakefield.org.uk 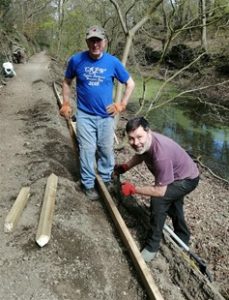 David Keighley of WDCF and Peter Hirst of Agbrigg and Belle Vue Community Association (ABVCA) met Councillor Matthew Morley and Graham West of WMDC to try and progress our joint scheme to create a  foot/cycle path with an all-weather surface to link Montague Street in Agbrigg with the entrance to Walton Colliery Nature Park at Oakenshaw Lane, which featured in our March newsletter.

The outcome can only be described as a triumph!

Basically the following was agreed:

Funding has now been agreed and all we are waiting for before starting work is confirmation of the agreement by letter from Councillor Morley. 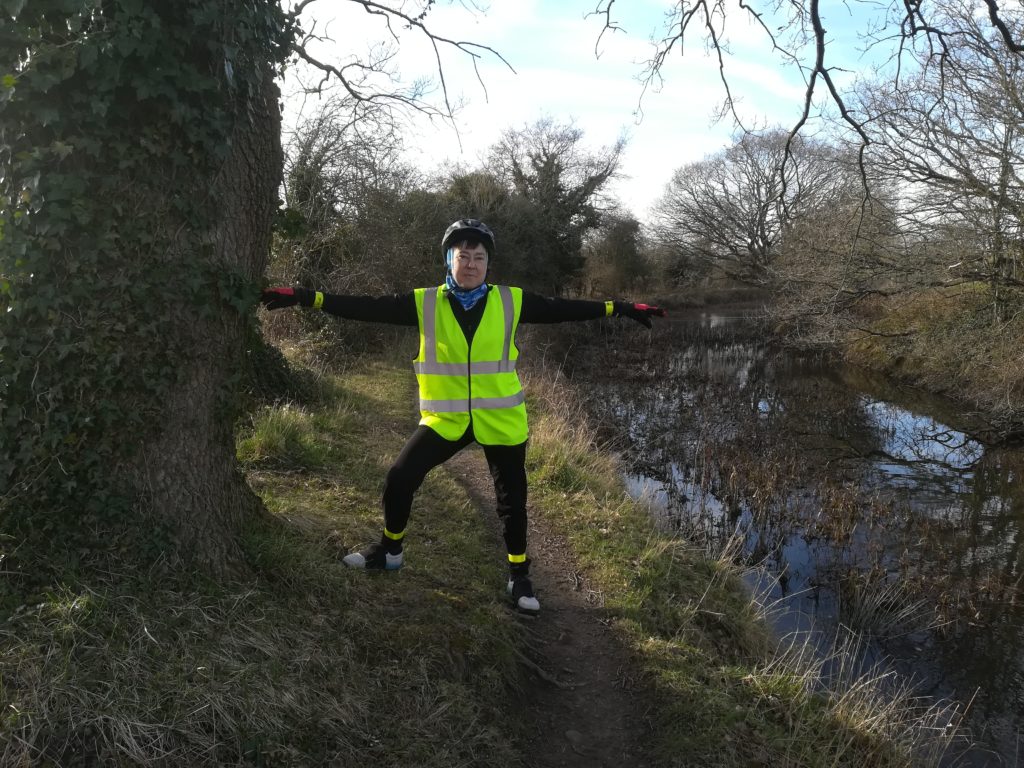 Leeds Cycling Campaign and Wakefield District Cycle Forum have jointly written to all of the candidates standing in the West Yorkshire mayoral election requesting their support for our campaign to replace the steep and dangerous steps on the Trans-Pennine Trail and National Cycle Network route 67 on the Aire and Calder Navigation in South Leeds.

The steps form part of the privately-owned Skelton Grange Road bridge in Stourton. The steps are currently inaccessible to large sections of the community, including wheelchair and mobility scooter users, people with physical disabilities, many older people, users of heavy e- bikes and families with buggies.

The joint working of the two organisations on the campaign highlights the importance that both Leeds Cycling Campaign and Wakefield District Cycle Forum attach to finding a solution to this long- standing problem and our belief that it requires a West Yorkshire wide response.

A petition organised by Leeds Cycling Campaign now has over 3,000 signatures calling for action and 500 people use the area every day for commuting or leisure activities.

The path is a vital part of our regional green infrastructure, linking West Yorkshire to North Yorkshire, the Midlands and the West and East coasts.

A stakeholder group chaired by Cllr Peter Carlill from Leeds City Council, with representation from Leeds Museums, the Canal and River Trust, Sustrans, the Trans-Pennine Trail Partnership, the West Yorkshire Combined Authority (WYCA), Wakefield Council and the Leeds Cycling Campaign, supports a feasibility study into rerouting the existing cycling and walking path through the site of Thwaite Mills Museum.

They point out that rerouting the path through the Museum site would create a pleasant public space, opening up an important South Leeds heritage asset to a much wider audience and linking it to other attractions such as Skelton Lake, RSPB St Aidans Nature Park, The Royal Armouries, Temple Newsam, Salts Mill and The Hepworth Wakefield.

The proposed path would provide a direct sustainable commuting and leisure route between Leeds and Wakefield. This is becoming increasingly important as large new housing development takes place on the route at Skelton Gate, Methley and at other canal-side sites.

The proposal would provide new income streams for the Museum by channelling people through the Mill site rather than away from it, as happens currently. Security would also be improved as more people use the area.

Kissing gates, ‘A’ frames and other hindrances

We asked WMDC the following series of questions about the kissing gate installed in Pontefract Park:

1. Why was this kissing-gate installed? Is it a reason specific to this location or a general departmental policy?

2. If it was specific to this location, who requested it and why?

3. Who was consulted about the installation of a new kissing gate on this cycle route?

4. What information or statistics did you have to support the decision to install a new kissing-gate?

5. What guidelines relating to cycle routes did you take into consideration?

6. Was an Equality Impact Assessment carried out at this location, as required by the Equality Act 2010 S.149, prior to the installation of this barrier?

7. Could you please provide a copy of that Equality Impact Assessment?

We reminded them that dismounting is not an option for the majority of users of adaptive cycles, such as handcycles, trikes and so on, and requiring a dismount for users of such cycles is a contravention of EA2010 S.20(3)(4) and constitutes an act of direct discrimination under Equality Act 2010, Section 21.

To date, we have received no response.  Our complaint to the Local Government Ombudsman about Wakefield City Council’s installation of obstructions on certain local cycle routes has now reached stage three of the process. The complaint has been accepted as being worthy of consideration and is now  being investigated.

Covid 19 has not assisted the  progress of our complaint as many investigators are now working from home.  As soon as we have some news, it will be passed on.  In the meantime, able riders can easily cycle round most barriers but the less able are doubly handicapped.

There are two difficulties with this project.  Firstly, we are still waiting for WMDC’s approval of the proposed site. Secondly, we have not yet raised sufficient money to pay for the splendid bench proposed.  The Go Fund Me page now has a shorter link: john-harvey and will be closing next month but if necessary we can erect a less expensive bench, along the lines of the one shown: 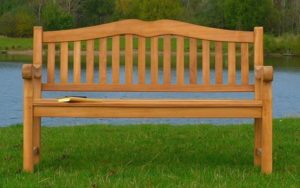 We have been asked for help by Open Country, a Yorkshire charity who enable people to access and enjoy the countryside. They regularly run tandem cycling around Wakefield, on Wednesday evenings between the hours of 6pm-9pm, so that people with a disability can enjoy the countryside on wheels. They enjoy rides of 5 – 18 miles per night with refreshments on route!
Open Country need front riders, often described as pilots. No previous tandem experience is necessary as all training is given and the tandems are provided. All Tandem Club participants must have both Covid-19 vaccines before joining the rides. If you would like to be involved, ring 07426 716677 or email wakefield@opencountry.org.uk 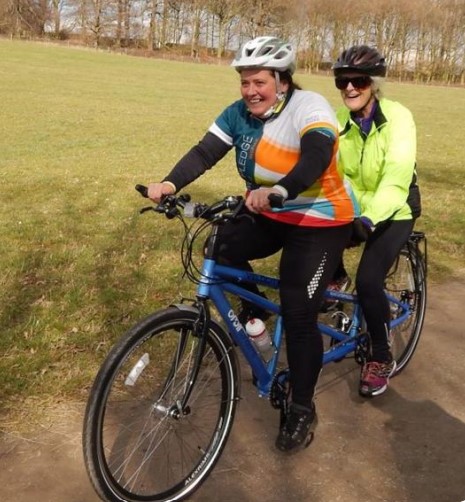 The provisional date for WDCF’s Annual General Meeting has been set at Thursday 15th July 2021 at  6.45 pm in Wakefield Town Hall.  We normally use the splendid Kingswood suite but social distancing requirements may mean we have to move. If you would like to hear our annual report direct from the lips of our chairman, cross examine our treasurer, suggest new routes or steps the council could take to improve cycling infrastructure, do come along.  If you would like to be more involved in the running of WDCF, the various posts are coming up for re-election so this is your chance.  If your experience of the forum has been limited to rides from Nostell, come and meet riders from Castleford and Thornes Park.  After what we hope is a unique year, it will be good to meet up again.