The positive introduction to the last newsletter may have been somewhat premature.  We came out of Lockdown 2 into Tier 3 restrictions, high winds, rain and a smattering of snow and then Lockdown 3.  The Forum’s rides to the end of the year, including our two Christmas rides, were cancelled. Our Guided Rides and Events 2020 leaflets have been shredded but you can still get out on your bike for exercise and essential shopping.  Two loaves of bread or a packet of cereal will fit in a pannier but it will take more than one trip to stock up your wine cellar. We were relieved to find that brake disk pads count as essentials.

We have agreed with Wakefield MDC to lead a minimum of 50 guided rides in 2021 and four bike doctor sessions.

Details of all rides and bike doctor sessions will appear on our Facebook page. In all cases, booking is essential on info@cycling-wakefield.org.uk.  If a ride looks particularly popular, we may be able to call on additional ride leaders to enable a second ride to set off from the same point at an appropriately socially distanced interval if that is what 2021’s rides require. 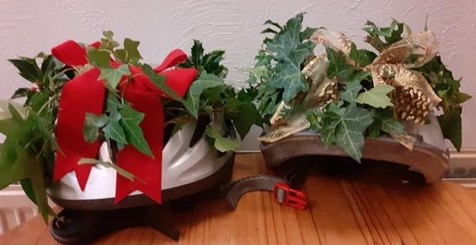 When I first saw this photo, I thought it was a decorated mantelpiece.  The accompanying snap revealed it was Libby and Richard Hall’s cycle helmets. 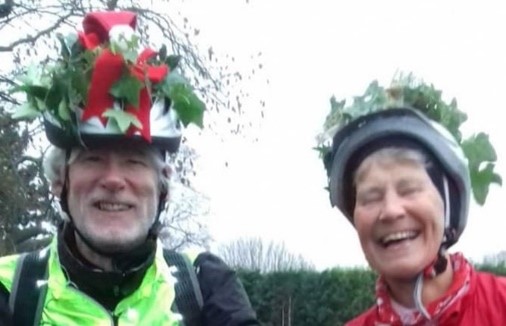 To complete the gallery of Wakefield District Cycle Forum’s best Christmas photos of 2020, here is a photo of Joan Sherriff Alexander’s festive attempt to convert her Circe to a cargo bike.  I suspect the proximity of the pine needles would make the rear seat unpopular, which perhaps explains why there are no decorated riders in view. 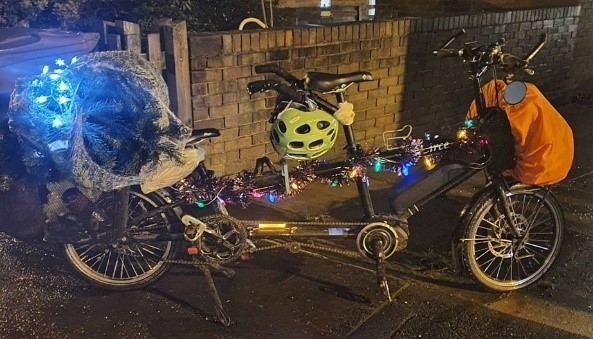 Our last newsletter reported that WDCF has joined with Agbrigg and Belle Vue Community Association to press for the provision of a shared use footway/cycleway from Oakenshaw Lane Walton to Montague Street Agbrigg along a section of the disused Barnsley canal.  An open letter in the following terms has been sent to the Chief Executive and Council leader:

‘Agbrigg and Belle Vue Community Association (ABVCA) and Wakefield District Cycle Forum (WDCF) are collaborating on a project to develop a foot/cycle path with an all-weather surface to link Montague Street in Agbrigg with the entrance to Walton Colliery Nature Park at Oakenshaw Lane. The project was developed with the support of Countryside and Highways Departments of Wakefield Council. Funding has been secured for the construction of the path and WDCF is committed to investigating further funding opportunities if necessary.

The Agbrigg and Belle Vue area is recognised as having significant indicators of multiple deprivation, including long-standing health inequalities. The area is likely to be affected by Covid more than most according to studies on the impact of the disease.

The recent development of Neil Fox Way has increased the use of Agbrigg Road as a ‘cut through’ from more affluent areas increasing danger from traffic and pollution. Whilst there is a reasonable provision of sports and health facilities in the area, cost is a significant barrier to many of the most vulnerable residents.

The proposed path is an important part of a sustainable, free -to- access strategy to improve both physical and mental health of all the communities that live in the area. If the current path is improved, there are plans to develop the community centre in Montague Street as a fitness/cycle hub to provide opportunities to introduce new walkers/cyclists to the network of paths within and beyond Walton Colliery Nature Park.

The route would provide a much-needed safe corridor to access the nearby countryside, with obvious leisure opportunities for the people of Agbrigg and Belle Vue but also encourages zero-carbon travel into Wakefield for work and shopping from other areas such as Walton and Crofton.

Unfortunately, the Highways Department has now withdrawn their support for the project after some safety and environmental issues were raised in a safety audit. ABVCA and WDCF have questioned the issues raised but Highways have not explained why higher standards are being imposed on this path compared with many similar paths in the district nor have they addressed how any problems can be positively addressed.

Highways have agreed that ‘there is merit in improving this link’. Rather than allow the issues on safety and environment to halt the project we call on Wakefield Council to use their expertise to develop ways to overcome these issues and take the project forward.’

Open Country, a Yorkshire disability charity, is fully supportive, believing that the proposed new path would improve access for all, and has signed a copy of the letter.  We have support too from Mandy Loach of the Trans Pennine Trail, John Trickett MP and Bridget Gill of Spectrum.  Local resident Kamran Akram said, ‘to have the path improved would mean that my little lad, and all the other kids in the area, would have a safe place to learn to ride his bike and it would make it so much easier for the people of Agbrigg to get to Walton Nature Reserve’ and another local resident, Chaudry Khan, commented, ‘I am a keen walker but stopped using this path because it was so churned up. The countryside is close to where I live if you get in a car, but that just creates more traffic. It makes sense to develop safe walkways; they are important for all aspects of health’

These maps illustrate the route of the proposed new path and how it would link into the existing network of traffic-free routes to the south and east. Like the Trans Pennine Trail, problems for cyclists extend beyond the boundaries of Wakefield MDC.  Leeds Cycling Campaign has released a new film highlighting the need for urgent action to provide safe access for cyclists, runners and walkers to the Aire and Calder canal at Skelton Grange Road Bridge.

The canal tow-path forms part of the scenic Trans Pennine Trail and Sustrans’ National Cycle Network. The steep and often slippery steps at the Bridge make access to the tow-path very difficult for anyone with a bike and impossible for people in wheelchairs or with chronic health conditions. Many riders with e-bikes, families with buggies, mobility scooter users and others with disabilities are likewise prevented from using the Trail.

In 2006, a full fifteen years ago, a feasibility study undertaken by Leeds City Council recommended a new pedestrian and cycling bridge at Skelton Grange. Another option would involve rerouting the path through the Council owned Thwaites Mill museum. Leeds Cycling Campaign is working with Leeds City Council, Leeds Local Access Forum, Leeds Civic Trust, Sustrans, the Canals and Rivers Trust and the Friends of the Trans Pennine Trail to explore both these options.

Olympic star Alistair Brownlee MBE, lending support to campaign, said: “The Aire and Calder canal tow path has just been resurfaced and is a fantastic active travel corridor. It makes up part of the Trans Pennine Trail and the Sustrans’ National cycle network and is a great commuter route into the city centre. It is a quiet and traffic free path that winds its way through natural and green habitats even though the user is never far from habitation. Promoting and increasing its usage are fantastic causes. Unfortunately, at the moment, access to it is restricted to users who can make it down a steep and narrow flight of steps. The creation of a new bridge here would be a very positive step for all of the current users and more importantly open up the path to many more. We all know the importance of health and activity, especially in the current climate. This project would be of real benefit to all parts of the local community.”

Leeds Cycling Campaign’s film about the steps at Skelton Grange Road Bridge can be viewed at: https://youtu.be/-pLVQBRPFFo and their petition at:

The first, and so far the last, ride of the year was the steady plus ride from Darrington on the 2nd January.  A total of ten riders were split into two groups beforehand, starting at separate time to comply with the government restrictions then in place. Coffee stops at Womersley meant that the riders were caught in a snowstorm on their way back to Darrington, providing some useful experience with no adverse effects.

We hope to restart rides towards the end of May. Please keep your eyes open on Facebook.

Although it has not been possible to lead any rides, the committee are still keeping active via Zoom.  In fact, we’ve probably had more meetings so far this year than we did in the whole of last year. 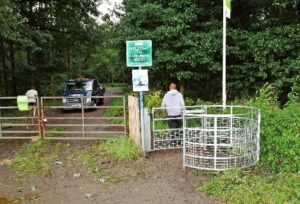 WDCF’s complaint about the installation of a kissing gate at Haw Park Wood (see photo) has now been referred to the Local Government Ombudsman.  We will keep you updated on the progress of the complaint.  If it is successful, it will serve as a useful precedent when opposing situations like the new kissing gates at Pontefract Park.

When the Agbrigg project has been approved and we can all get out, working parties will be needed to help clear vegetation in what is a pleasant countryside track beside the canal. If you would like to be involved in future working parties, which usually happen on Tuesday mornings, do email your details to info@cycling-wakefield.org.uk .  A van or a trailer would be very useful to move equipment, but we welcome all volunteers and will let you know in advance what equipment would be useful.

Like many organisations, we were not able to hold our AGM last year due to the Covid 19 restrictions. This year, we provisionally planned to hold the AGM in your dining room, study, spare bedroom or wherever else you keep your laptop, tablet or phone, using the wonders of technology and Zoom.

When the proposed relaxation of restrictions was announced, we considered holding the meeting outdoors in May but the limitations on the size of the meeting to 30 and the fact that April showers can extend well beyond the end of that month caused another rethink.

The current proposal is that, subject to any further restrictions, the AGM will be held in July.  Details will be emailed to members, appear on Facebook and may even be in the next newsletter. 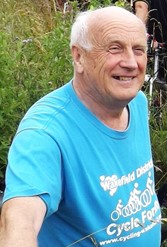 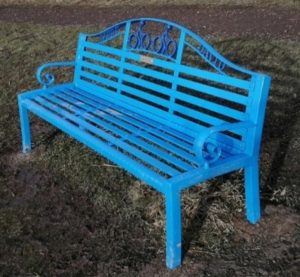 The steady stream of donations to our Go Fund Me page towards WDCF’s plan to provide a bench as a memorial to the late John Harvey, a keen and enthusiastic member of the forum, has now slowed to a trickle, although we are only partway to our target.

This is the type of bench proposed – something cheerful, colourful, made of iron, robust, serviceable and eminently useful – like the man himself. 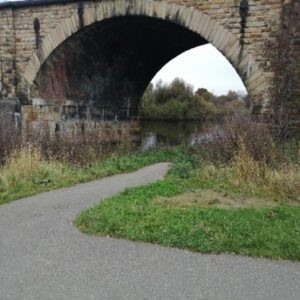 This is a photograph of the site on which we would like to site the bench.

If you wish to make a contribution towards the cost, rather than just ‘liking’ the idea of it, please go to John Harvey Fund